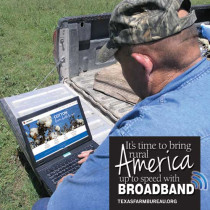 Many take high-speed Internet for granted. But in rural America, it’s a luxury.

In urban areas, only about 4 percent are without similar access.

It’s the 21st Century. Connecting online isn’t just a comfort. It’s a competitive necessity. Farmers and ranchers rely on broadband to manage their farms and for marketing. America relies on them for food and fiber.

An urban business can’t afford a few hours without high-speed Internet. Modern agriculture also needs it. After all, farmers are business owners, too.