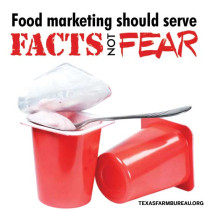 When food marketing crosses the line

Stonyfield Organic, are you kidding?

Stonyfield Organic has crossed a line. They used young children in a video that make outrageous claims against genetically engineered crops. One adorable little girl says they are “monstrous.” Another mentioned the fiction of “fish genes” in tomatoes.

Virtually all the science is racing the other way to the obvious conclusion that biotech food is safe. Yet, a leader in this field shamelessly used children to peddle a false, anti-science message.

Thousands of folks who begged to differ on Stonyfield’s social media spaces were called trolls. Most of their comments were deleted. That’s one way to control the debate I guess.

If you want to peddle anti-science nonsense, that’s your business. But handing that script to kids should be off limits. Stonyfield has some explaining to do.