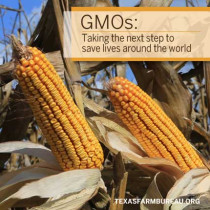 The positive side of GMOs

Bioengineered crops, or GMOs, have been studied for decades and have been given high marks for both safety and innovation.

Millions of tons of insecticides have been shelved and tons of fuel and herbicide have not been used because some plants now have the ability to fight pests and diseases themselves. The result is a cleaner and safer environment and a much healthier, efficiently raised food product for your family and mine.

Now scientists are taking the next step and adding lifesaving vitamins and nutrients into foods. A biotech crop called Golden Rice is fortified genetically with Vitamin A to fight deficiencies in some Asian countries that leads to hundreds of thousands of cases of blindness and millions of deaths each year. A new "Super Banana" is being genetically engineered to do the same thing to save children in Eastern Africa.

Yet we hear the protests against Golden Rice and Super Bananas. Debate is fine until it gets silly and then it becomes nothing but a diatribe. And dangerous.

Biotechnology has taken the next step to saving lives around the world–not by adding more food, but by making food more nutritious and providing what people need to stay healthy. It will be a dying shame–if these groups are successful in beating biotechnology back–for children all over the world.