Posted on May 7, 2018 in Audio, Editorial, Featured, Your Texas Agriculture Minute 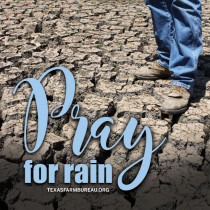 Texas drought cause for worry

Drought is back and in a big way. Sixty Texas counties are now official drought disaster areas.

Unfortunately, many of them are the same counties where wildfires have raged this year and last. That makes growing grass a kind of “mission impossible.”

The Texas Drought Monitor plots the location and severity of drought. Red on the map indicates extreme drought. That’s bad enough, but the darker, brownish color touches all or parts of 14 counties. That’s called “exceptional” drought, and it’s a catastrophe. Other categories are severe and moderate drought and abnormally dry. More than half the state is suffering from lack of rain.

This drought is not yet as widespread as the epic drought of 2011, but it is just as severe in places. That means crops fail and livestock are sold for lack of feed.

Our recovery from the drought of 2011 is not yet complete. A re-run is a scary thought.