Posted on May 21, 2018 in Audio, Editorial, Featured, Your Texas Agriculture Minute 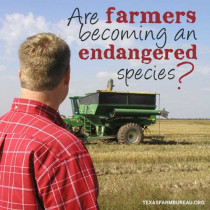 You can make a good case that farming is an endangered enterprise. Farm income is less than half of what it was five years ago. Agriculture is heavily dependent on trade, and the current environment is rocky at best.

Prior to this administration, agriculture was under a regulatory assault. That, at least, is somewhat better. But some farmers and ranchers feel the government cares more about endangered species than the farm families who have to figure out a way to stay on the land.

Last week, the vital farm bill became a pawn for an unrelated issue. Historically bipartisan legislation, the farm bill is now anything but. It provides a minimum safety net for farmers, mostly in the form of crop insurance, without which the risk becomes too great to plant.

Another farm bill vote will take place soon. Farm and ranch families are watching with concern.