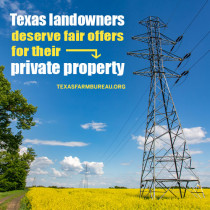 The summer movie, Little Pink House, has focused attention on the unfairness of eminent domain. The movie looks back to the 2005 taking of the home owned by Suzette Kelo.

In the case of Kelo versus New London, Kelo had sued that Connecticut city over the condemnation of her property. The city planned development of the land for economic development. Kelo lost in the Supreme Court.

Texas passed a law to prevent that sort of thing, but it can be quirky in practice.

Eminent domain, the taking of property by the government or public utilities, does serve a public need. However, the fifth amendment of the U.S. Constitution is very clear on the issue of compensation.

In Texas, property owners do not always get good faith offers. Those with resources and the will to challenge the process are often successful. Others, without deep pockets, take low-ball offers, knowing property takers can outlast them in court.

Some of us believe Texas law should require a good faith offer. The Legislature gets another shot at that in January.