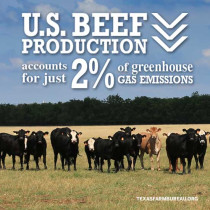 Apparently, it’s time to beat up on beef. Again.

Some say beef is the largest culprit of greenhouse gas emissions.

You know what I say? Baloney! Beef baloney!

Some think if we stop raising livestock, we can use that land to grow other crops. That might be the case for some pastures, but not for most. On much of this land, grass is all that will grow. And without ruminants, millions of pasture acres would be of no human food value.

Eating beef, and all meat, is a choice—free of climate guilt.

And in Texas, we drink our sweet tea, wave to folks on the road and eat plenty of beef.