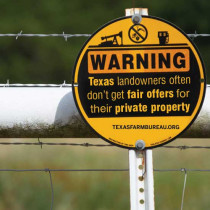 Eminent domain first offer can be a trap for landowners

When corporations and governments move to acquire private lands for public needs, it triggers a process that’s part of eminent domain. Some of these property takers start the process in good faith. Some don’t.

There’s always a first offer. Landowners might be told they have no choices. Sometimes, intimidated by the prospect of facing a multimillion-dollar corporation or a government in court, this first offer is accepted.

The fact is property owners do have choices. At the very least, they should discuss the expectations for restoring the land to the extent possible. Very often there is a higher offer to be had.

There are hundreds of cases where landowners improve their position by negotiating. Often, when they take the matter to court, they win.

There is only one certain way to settle this—require a genuine good faith offer as a matter of Texas law. The Texas Legislature will face this issue in Austin early next year. Let them know what you think.

If you own a foot of property in Texas, next time, it could be you.