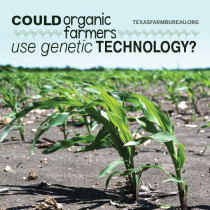 Could organic farmers use genetic technology?

I’ve often wondered why organic farming does not incorporate biotechnology or genetic advances in food crops. It seems to seamlessly fit so many organic goals that we all should share.

Instead of fighting about it, why not use both technologies?

In biotech, changes are made at the molecular level so that crop pests cannot consume growing plants. The gene is altered with a common soil bacteria with a long name—BT for short.

Mother Nature uses bacteria to ferry genes all the time. Organic farmers will recognize BT, because they already buy it as a spray for organic crops. That doesn’t seem like a great deal of difference.

Organic farming could plug into this technology with a simple change in the rules. No matter what you plant, you are using some kind of modified DNA.

We’ve been doing it for thousands of years.