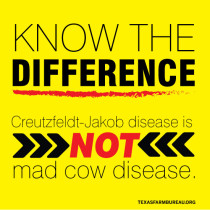 CJD and 'mad cow' not the same

The media recently reported on a high-profile case of the rare brain disease known as Creutzfeldt-Jakob disease (CJD). Often, the cause of CJD is unknown. I don’t have a problem with the report, but I do with the way it was reported.

One story reported the victim “had suffered Creutzfeldt-Jakob disease, better known as mad cow.” This happens so often that it’s accepted. It’s also wrong. There are about 300 cases of CJD in the U.S. each year. A similar fatal disease called New Variant CJD is nicknamed mad cow. It’s likely caused by consuming brain or spinal cord tissue from an infected food animal.

There have been four human cases in the U.S. Ever. Three of those were likely contracted outside the United States. Major changes in livestock feeding practices and processing have virtually eliminated new cases here.

There are many misperceptions by the public concerning agriculture. In this case, a simple Google search can clear it up.