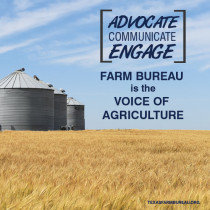 When delegates from every state meet at the American Farm Bureau Federation’s annual meeting in New Orleans this week, a centennial celebration will be on the agenda.

Farm Bureau was officially born in 1919 in Chicago, but the seeds were planted seven years prior to that. In Broome County, New York, workers of the state Extension service established a “farm” bureau to organize local farmers. They wanted a more concentrated effort to teach the new techniques and developments of agricultural research.

Before long, other bureaus were opened throughout the country. It may not have been the birth of modern agriculture, but it certainly launched the formative years.

The first task of Farm Bureau was to get farming information into the hands and minds of farmers and ranchers. Seven years later, these bureaus were organized into a single national organization.

Over time, it would develop policy and represent the interests of farm families all over the nation, and Texas joined the movement in 1933.