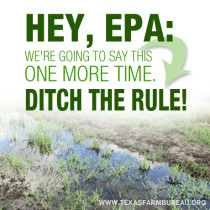 EPA has a hearing problem

Agriculture is blasting proposed revisions to the Clean Water Act that muddy the waters between federal and state regulatory powers. Called “Ditch the Rule,” the campaign has motivated an army of farmers and ranchers to speak out.

In response, EPA asks, “What problem?”

EPA’s intention is black and white. The agency wants to control all waters in the U.S by expanding its authority to non-point sources of pollution.

What does that mean to you? Potential regulation of ponds, ditches and fields. The possible need to acquire Federal permits to build fences, apply fertilizer or control weeds.

EPA’s campaign is telling agriculture to calm its fears.

Farmers and ranchers know better. They look at the EPA track record.

It’s time to “Ditch the Rule” once and for all. 12,000 farmers and ranchers have gone on the record in an attempt to change this ill-advised proposal.

Texas farmers and ranchers can make it 12,000 more.