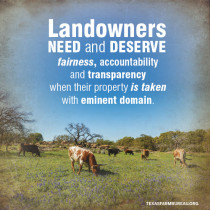 Battle for eminent domain fairness is under way

Texas’ reputation as a property rights state is currently not much more than a myth.

Landowners complain of offers far below market value, often not enough to restore the land after a right-of-way is taken. The reform coalition seeks transparency in the process, with public meetings and some teeth in a law that requires making a fair offer.

By now you are thinking, “That’s not too much to ask.” It’s not.

Those who like eminent domain law the way it is are complaining about cost and delays.

Does that mean we don’t have enough money or time to be fair? Considering that private entities will make billions with property takings, I think we can afford to be fair.

No one is attacking eminent domain. We need infrastructure. It is, however, shameful to build it on the backs of farmers, ranchers and rural landowners