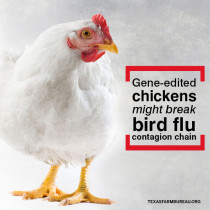 The great worldwide flu pandemic of 1918 killed 50 million people and reduced average life expectancy in the U.S. alone by an astonishing 12 percent.

Today, the medical community lives in fear that it could happen again.

Bird flu is especially concerning, as those strains of the disease can build up in wild bird populations, jump to chickens and then to humans. Humans are particularly susceptible to those flu strains.

What if we could break the chain?

British scientists are on it, developing chickens that are resistant to flu.

Gene-editing techniques can knock out a protein in chicken DNA that flu needs to develop. People might still encounter wild birds but the “flu bridge” between wild birds and people would be gone.

The evidence is mounting in favor of biotechnology as one of the most important developments in human history—in medicine and in food.