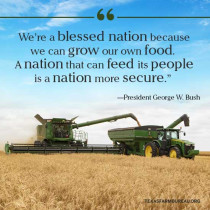 On President’s Day, I like to remind myself that our presidents were not only founding fathers, but “founding farmers.”

In the 18th Century, there was no government construct for research. No government employees to share information. George Washington and Thomas Jefferson were two of our presidents who stepped into those roles.

Abraham Lincoln established the U.S. Department of Agriculture, which has played a critical role in the education of farmers for more than 150 years.

Our former presidents also understood the importance of private property rights. This was vital in the development of the most powerful economy on earth.

Today’s reckless use of eminent domain in Texas would alarm them.

After all, some of them helped write the Fifth Amendment—the part about just compensation in a taking.