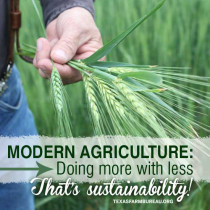 Sustainability: Modern agriculture gets it

There is a word used more than any other in discussions about food, climate and the planet. That word—sustainability—has been part of modern agriculture’s farming practices for some time.

Burning less fuel and other resources is just smart farming. Reducing trips across the field lowers costs. With the thin profit margins in agriculture, that matters a lot.

Cropping methods like low-till and no-till disturb the soil less, applying weed control while crossing the field for another reason. This can reduce carbon footprints by significant amounts.

Then there is the often-maligned tool of biotechnology. Seeds with their own pest resistance and drought tolerance reduce the need to expend fuel crossing the field or pumping water. Farmers who once burned fossil fuels a dozen times to save a crop have reduced that to only one or two.

For a farm to work, there also must also be economic sustainability.