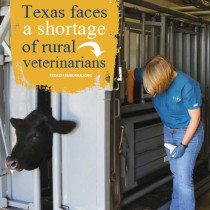 Texas has one school of veterinary medicine, and it’s a good one. As a Texas A&M Aggie, I am very proud of our vet school. But is one school enough? I say no. We need another one like the proposed school at Texas Tech University.

A lot of Aggie vets practice in Texas. There are some from other states and some with degrees earned offshore. Most have one thing in common. Student debt. And lots of it.

This drives new graduates into higher paying small animal practices. Often left without adequate access to vet care are large animal farmers and ranchers. The aging population of large animal vets is a bad problem destined to get worse.

Texas Tech and all of West Texas are stepping up to this challenge with an innovative plan and a tsunami of local support. Groups like Amarillo Matters have launched fundraising drives.

Texas needs another vet school. Guns up and Gig ‘em. We need both.