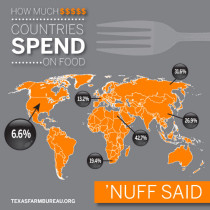 Food’s a bargain no matter how you look at it

It’s easy to complain about the cost of food because it keeps going up. Drought has made everything from the price of beef to fruits and vegetables more expensive.

Yet, food in America? Still a bargain. Newly released numbers from the Department of Agriculture show Americans spend just 6.6 percent of their budget on food consumed at home.

Compare that with Mexico at 25 percent. Russia–more than 31 percent. In Pakistan, consumers spend nearly half of their income on food.

Some food activists would snatch technology away from our American farm families and go strictly organic, local or “slow,” whatever that is.

Nothing wrong with any of those methods, but sophisticated wonders such as biotechnology, GPS mapping systems and ultra-efficient irrigation are just some of the tools farmers use to provide an abundance of food for consumers. While leaving more dollars, still in your pocket. I’m Gene Hall and this is Your Texas Agriculture Minute.