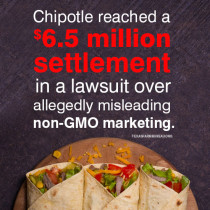 Our old friends at Chipotle settled a class action lawsuit in California over alleged false advertising on the issue of GMO-free products. They agreed to pay $6.5 million dollars to the plaintiffs. At issue was whether “reasonable consumers” would have been deceived by the company’s advertising.

It turns out that it’s almost impossible to sell food that is GMO-free. Even if it were, those products are perfectly safe and such a ban would be a waste of effort. Those are resources better used to combat problems like food borne illness—something Chipotle knows of first-hand.

The thing is nearly all GMO-free claims are misleading. The ads hint at danger that does not exist. We’ve now served more than three trillion GMO meals in North America without health or environmental consequences.

Non-GMO labels routinely appear on products for which there are no GMO varieties.

When it comes to food, there is often no hesitation to sell fear.