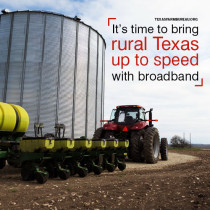 Quality broadband internet is more than surfing the web and sports scores. It’s economic opportunity, and rural Texas is once more last in line for this essential service. It was the same for electricity, telephones and cable television.

Bridging that gap means more business, more customers and an economic boost for all.

But there is progress. The state of Texas passed legislation this year. Gov. Greg Abbott has established a broadband council. Broadband mapping is being planned.

The isolation of rural Texas is the greatest obstacle. If it were profitable for internet providers to economically reach into rural areas, they’d have done so already. Frederick says partnerships between farmers, rural households, communities and the state are needed.