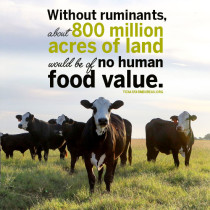 It's trendy to attack beef, but don't

Convincing research that red meat is not a health threat was recently published. Anti-agriculture outrage was loud and predictable.

But there’s still the old water argument, right? If we stop raising cattle, we can grow food where cattle roamed. Ah, maybe not.

Hundreds of thousands of cattle are raised in the Southwest, in places that are in or near the Chihuahuan Desert. Other arid lands are nearby.

Know what grows there? Native grasses and plants. That’s the whole list, with only a few irrigated exceptions. There’s a lot of protein, but only one way to harvest—with livestock.

If you pulled off all the cows and tried to grow a food crop, you’d need to pull a thousand times more water out of the ground than the scattered windmill pumps giving cows a drink now.

The cover crops you manage with livestock are really good at capturing carbon.

It’s trendy to attack beef. But such attacks are based on flawed belief. Not facts.