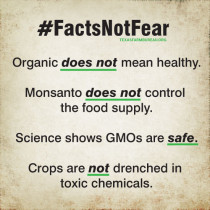 Food is not scary

This is Halloween week—one of those times when we have society’s permission to act scary. Judging by the retail displays, selling fear is quite profitable.

But that’s not the only fear being sold.

Some peddle the scary notion that modern agriculture—and our food—is not safe. Those people make money from food fear. No one ever raises donations with “everything is all right.”

And it is overwhelmingly all right.

GMOs have been a target, but we’ve served more than three trillion GMO meals in North America without a single health or environmental consequence, while reducing pesticide use and carbon footprints.

The real food fear is that the world may not have enough of it in the future. But modern agricultural technology can handle that, too. If we don’t do silly things to hamper it.

The message of our food is hope, not fear.