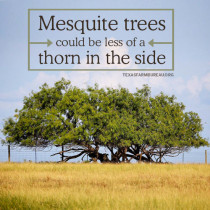 Can mesquite be a crop?

It’s not quite accurate to say that the prolific and invasive mesquite tree is totally useless. They grow with little regard for heat or moisture and can provide shade and a tasty bean pod for livestock. And who can’t admire the flavor mesquite smoke can add to Texas barbecue?

But the thorns are both sharp and sturdy, with potential to injure livestock and puncture tires. Cut them down and they come roaring back with a vengeance. Mesquites grow so fast and thick they can crowd out grazing.

But there are thornless mesquites in the world.

Cross pollinating two of them may have produced a mesquite that grows straight, is still resistant to Texas heat and dry conditions and otherwise looks like a mesquite.

It’s not a bad looking tree. Some homeowners are going to like them.

Ranchers have fought mesquite for more than a century. But now a new ornamental crop could be born for farmers and ranchers on hot and dry lands. What’ll they think of next?