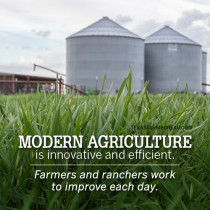 It’s frustrating to engage about modern agriculture when some folks support agricultural policy options that are in conflict. Take climate change for example.

Lots of farmers are reducing carbon footprints by lowering emissions and trips across the field. These are desirable environmental and economic goals. We’re now studying carbon negative farming, sequestering carbon in the soil. However, you don’t get there by taking the best tools away from farmers. Namely, GMO seed technology and the chemical glyphosate.

With their built-in pest resistance, it is not necessary to treat GMO crops nearly as often. We’re talking many fewer trips across the field. But we’re still going to have to control weeds. That’s where glyphosate, with very low toxicity, comes in. The chemicals farmers would otherwise use are more toxic and often applied more frequently. Carbon footprints would get bigger.

There is overwhelming evidence. Science is true, whether you believe it or not.