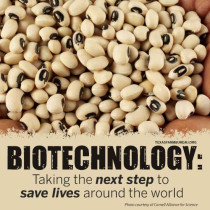 According to a release from the Cornell Alliance for Science, the food insecure nation of Nigeria will soon get a major boost from a genetically-altered variety of cowpeas.

Often called “the poor man’s meat,” cowpeas are rich in protein and are a food staple in many parts of the world.

Nigeria has successfully created a regulatory system to safeguard the process.

In the United States, opposition to GMO and biotechnology is a classic first-world problem, common in well-fed nations. In poor countries, it’s a deadly serious issue.

The BT cowpea could increase food security in Nigeria and other nations where food is a desperate problem.

Meanwhile, we have yet to see the first environmental or human health consequence of GMO biotechnology. And science is still true, whether you believe it or not.