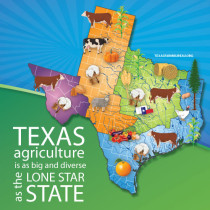 Snapshot of Texas agriculture with the census

The U.S. Census of Agriculture is conducted every five years. It’s the best comprehensive snapshot of what’s happening on America’s farms and ranches—from the economics to the people.

Data from the 2017 census is online and easy to access. It’s interesting to dive into the numbers.

Just as we thought, Texas agriculture is as big as the state itself—$24 billion in sales and nearly 250,000 farms.

Driving the economic engine are cattle and calves and the 114,000 ranchers who raise them. Sales from cattle and calves accounted for $12 billion, or 49 percent, of all agricultural sales in our state. That’s tops in the country.

Second on the list are poultry and eggs at nearly $3 billion in sales.

Third on the list in Texas and the first row-crop are cotton and cottonseed. About 6,100 farmers generated $2.6 billion in sales.

Milk from cows comes in fourth with just 458 farmers, but they had over $2.1 billion in sales.

Not far behind are grains, oilseeds, dry beans and dry peas—over 10,000 farmers and $2.1 billion in sales.

The sales rankings continue down the list. The diversity of Texas agriculture is impressive. It all adds up to a vital part of our local and state economies. Less than two percent of our nation’s population grows food, fiber and fuel so others don’t have to.

The numbers from the census tell the amazing story of modern agriculture.