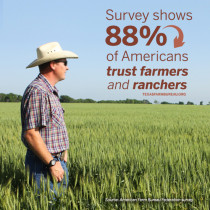 From the grocery store to fast food chains, consumer decisions shape our food supplies, and in turn, our farming practices.

Conventional, organic, grass-finished, grain-finished—each is a little different. But, in the end, a nutritious product is raised by a farmer who cares.

And they’re telling us about it. Farmers and ranchers share their stories on social media, in blogs, at conferences and local meetings. They want to tell you about the food they’ve raised and to show you the family behind the farm.

That transparency is growing trust.

Recent research from the American Farm Bureau Federation shows farmers continue to enjoy one of the highest levels of public trust among any U.S. group. The survey found that 88% of Americans trust farmers.

The reality? There’s a big gap between the level of trust in farmers versus farming.

The good news is the skeptical public is interested. The survey shows three out of four Americans want to know more about how their food is produced. Their appetite to learn more presents an opportunity, and engagement will be key to closing the gap.

Have you heard of the movable middle? In this case, it’s the more than 60% of Americans who are open-minded, waiting to be engaged by someone they trust. That’s the group who’s attitudes about modern farming practices might improve with better information from farmers and those in agriculture.

Those conversations can happen anywhere, anytime.

Delivering safe, high-quality food, fiber and fuel around the world is a true story, and it’s a story worth telling every chance you can.

There’s still ground to cover, but farmers and ranchers are sharing their way of life and cultivating meaningful, lasting relationships.