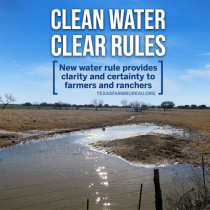 A bad federal rule called Waters of the United States is now drying up. That’s good news. The federal government no longer can claim a small farm pond on private land is a navigable water.

The new Navigable Waters Protection Rule announced on January 23 is just what Texas farmers and ranchers need—clarity and certainty. Our nation’s navigable waters will remain well-protected, while farmers and ranchers will no longer be subjected to ambiguous guidelines. The 2015 Waters of the U.S. rule was less about clean water and more about land control.

The new rule defines four clear categories of waters that are federally regulated under the Clean Water Act. They include the territorial seas and traditional navigable waters, like the Atlantic Ocean and the Mississippi River; perennial and intermittent tributaries; certain lakes, ponds, and impoundments; and wetlands that are adjacent to jurisdictional waters.

Most importantly, the rule details what waters are not subject to federal control. These include features that only contain water in direct response to rainfall; groundwater; many ditches, including most farm and roadside ditches; prior converted cropland; farm and stock watering ponds; and waste treatment systems.