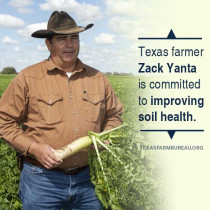 There’s a lot of talk these days about sustainability on the farm.

Zack Yanta of Runge in Karnes County is practicing it, and he’s telling others about his experience on his family’s farm and ranch.

He’s a frequent guest at conferences. His approach has been featured in articles and newsletters.

A two- to three-inch rainfall used to leave water standing in the field puddled for maybe a week or longer. Last year, a similar rain yielded a noticeable difference—there was hardly any mud on his boots and on the tires of the vehicle.

And in just a couple of years, he’s already seeing an increase in life below ground, in the form of earthworms, and an abundance of life above it in deer and other wildlife.

His cattle also benefit. The cover crops have resulted in greater production. Managed grazing, rotations and species, such as Klein grass and triticale, have helped double carrying capacity.

Yanta urges farmers not to focus on how much soil health measures will cost them. Instead, he says they should ask themselves what it will cost them not to employ soil health-building principles.

He has a “let’s make it better” stewardship ethic. That’s a quality that’s shared among all farmers and ranchers. Taking care of the land so it can be passed on to future generations. Sustainable—both environmentally and economically.