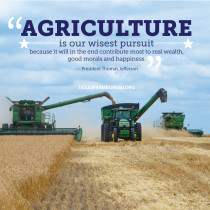 President’s Day was created to remember America’s first president, George Washington, after his death in 1799. Washington considered himself first a farmer and spent his days before and after public office devoted to his passion of agriculture.

In honor of President’s Day, we look back at 12 U.S. presidents who were farmers or involved in agriculture.

John Adams grew up on his family’s farm in Boston and was said to be interested in increasing the fertility of his land.

Thomas Jefferson is characterized as one of America’s early agronomists. Jefferson was focused on practices that returned vital elements back to the soil.

James Monroe was the fifth president of the U.S. In 1788, he bought an 800-acre farm in Charlottesville, Virginia. He later purchased and moved to the Highland plantation next to Jefferson.

Before William Henry Harrison stepped into politics to become president, where he served for one month before passing away, he retired from the military to settle into farm life in Ohio.

Sherwood Forest Plantation was the home and family farm of James C. Tyler, our tenth president.

Abraham Lincoln’s background in agriculture was typical of most farming experiences and rural life at that time. He would later establish the U.S. Department of Agriculture and the Land Grant system through the Homestead Act.

Theodore Roosevelt originally went to Dakota to hunt bison, and during one trip, he became interested in cattle ranching and soon invested most of his fortune into the business.

Harry Truman worked on his family farm in Missouri after a time in banking and before politics.

A widowed aunt gave Lyndon Johnson a 250-acre ranch in the Texas Hill Country when he was a U.S. Senator. The ranch would grow to 2,700 acres and remain operational during his political career.

Jimmy Carter worked in his family’s peanut farming business before he became involved in politics.

And Bill Clinton spent his childhood on a 400-acre farm, where he picked beans, corn and tomatoes and cared for animals.

Several who have worn the title of Commander in Chief had roots that ran deep on farms and ranches across America.