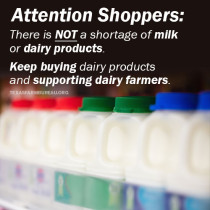 Why are some dairy farmers dumping raw milk?

The videos are startling. Images on social media of some U.S. dairy farmers disposing of raw milk on their farms has the public asking, why are they dumping their milk?

The answer is it’s a supply chain management issue. There is more milk right now than space available in processing plaints. It’s estimated that supply exceeds demand by at least 10 percent—a gap that could widen in the days ahead.

Industry leaders say there was an initial increase in milk purchases at grocery stores because of COVID-19 as consumers stocked up on dairy and other products. That retail demand has now dropped.

Foodservice sales at the same time rapidly declined due to the closing of schools and restaurants. About half of butter and cheese consumed in our country is through restaurants.

Before milk can be sold in stores or turned into product, it must undergo processing. Some processors are geared to produce milk and dairy products in formats for restaurants and industry outlets and cannot easily retool to produce for the retail market. Lacking orders for finished goods, several processing plants are curtailing or ceasing operations, resulting in cancelled milk orders.

This, in combination with the perishable nature of the product, has resulted in a need to dispose of raw milk on farms, as a last resort.

It’s fair to say Texas dairy farmers are in a better situation than farmers in other states. But it is still happening in our state. One Texas dairy farmer says it’s the first time in his 32 years in business that he’s had to dump milk.

Fewer people are eating out. Fewer pounds of butter and cheese are being enjoyed. He says a portion of the nation’s milk supply is without a home.

What happens now? Dairy farmers are in survival mode. Many are cutting back on inputs, trying to feed their cows at a reduced cost. They’re doing all they can to keep dairies open until the doors of restaurants, schools and our economy open again.