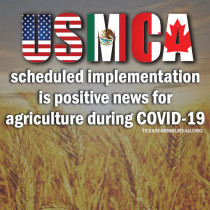 USMCA is one light at end of COVID-19 tunnel

There were some steps to complete before the historic agreement went into effect. Those steps have now been completed.

U.S. Trade Representative Robert Lighthizer has notified Congress that Canada and Mexico have taken measures necessary to comply with their commitments under the USMCA. The agreement will enter into force on July 1.

In late January, USMCA supporters described it as an important step in the economic recovery of Texas agriculture. Little did we know what lied ahead and the deeper economic hardships of COVID-19.

USMCA will help agriculture dig out. The question is how much and how soon? The agreement provides new market access for American dairy and poultry products while preserving the zero-tariff platform on all other agricultural products.

USMCA means an additional $227 million in dairy exports for U.S.farmers, according to industry leaders. Canada also agreed to new tariff rate quotas for U.S. poultry and eggs. The agreement allows an additional 10 million eggs from the U.S. annually.

Will U.S. agriculture be in position on July 1 to fully benefit from USMCA? Many are asking, and only time will tell. The landmark trade agreement that holds so much promise for Texas farmers and ranchers will be waiting.