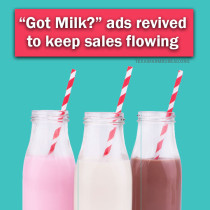 Six years after being retired, the popular “Got milk?” advertising campaign is back with a full glass.

The Milk Processor Education Program is funding the campaign. The ads have been revived with an even stronger social media flavor. That’s important for a campaign that first debuted in 1994.

The effort hopes to capture current momentum with consumers. Milk sales are up. The biggest year-over-year sales jump was in March at 21 percent, and purchases continue to outpace a year ago.

We were given a taste of the revived “Got milk?” campaign last week. Video clips of Olympic gold medalist Katie Ledecky swimming the length of a pool with a glass of chocolate milk balanced on her head dominated social feeds across the country.

There are 352 Grade A dairies with an estimated 551,000 cows in our state. Texas is the fifth-largest dairy producing state in the nation.

Officials says the campaign will likely run through the end of this year.

“Got milk?” is a question Americans continue to answer with a glass raised and a resounding “yes.”