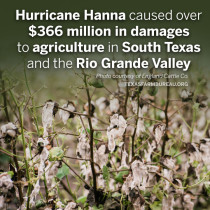 We now know the cost of the gut-punch that Hurricane Hanna delivered in July to South Texas farmers and ranchers. The storm caused over $366 million in damages to agriculture in the area.

The storm impacted 32 counties, but the Texas A&M AgriLife Extension Service says about 95% of the economic damage occurred in the Lower Rio Grande Valley.

Valley cotton was perhaps the most vulnerable. Much of the crop had been defoliated but mostly unharvested. Around 95% of the cotton crop was lost to the storm.

Citrus and sugarcane crops were exposed to significant losses. The potential annual harvest of citrus was reduced by almost one-third, while almost half of the annual sugarcane production was lost.

The hurricane made worse the already poor market conditions for commodities because of COVID-19. For some Valley farmers, this is the third year in a row of devastating losses because of flooding. Some farms are on the brink.

Federal help could soon be on the way. Texas Farm Bureau is working with Congressional leaders on possible relief measures. Texas Governor Greg Abbott has sent a letter to the United States Department of Agriculture requesting a disaster designation for eight counties in the Rio Grande Valley.

A USDA disaster designation makes federal assistance, such as emergency loans, available to farmers and ranchers who have suffered losses in designated counties, as well as in counties that are contiguous to a designated county.