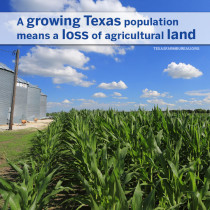 Farm and ranch acres in Texas are disappearing. The land is not gone, but its use is.
You’re probably not surprised. What may surprise you, however, is the rate at which the land is being converted.

The Texas A&M Natural Resources Institute says in the 20 years from 1997-2017, Texas lost about 2.2 million acres of working lands. The rate of conversion accelerated in the last five-year period, with over 1.2 million acres lost during that time. That’s over 650 acres per day.

The process of working land conversion and loss is driven by economic and population growth.

Population growth increases land values and markets, creating incentives for landowners to subdivide and sell their land. As ownership sizes decrease, the likelihood of maintaining a profit with traditional farming, ranching and forestry uses also decreases, facilitating the conversion of working lands to non-agricultural uses.

And the conversion promises to continue. By the year 2050, Texas is projected to support upwards of 40 million total residents, according to the Texas Demographic Center.

The demand for rural land will be especially strong in areas surrounding major urban centers and transportation corridors.

But we need to keep farmers, ranchers and forestry owners on the land to grow our food, conserve water and preserve wildlife habitat.

That’s good for you, for me and for Texas.