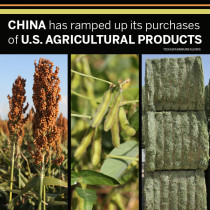 U.S. officials recently issued a progress report on the agricultural provisions of the U.S.-China Phase One Economic and Trade Agreement.

The agreement went into force eight months ago.

Structural barriers are being addressed. The Office of the U.S. Trade Representative and the U.S. Department of Agriculture (USDA) report China has implemented at least 50 of the 57 technical commitments under the agreement.

Sales of U.S. corn to China are at an all-time high of 8.7 million tons. U.S. soybean sales for marketing year 2021 are off to the strongest start in history, with outstanding sales to China doubling 2017 levels.

U.S. exports of sorghum to China from January to August totaled $617 million. That’s up from $561 million for the same period in 2017. U.S. pork exports to China hit an all-time record in just the first five months of 2020.

And U.S. beef and beef product exports to China through August are already more than triple the total for 2017.

Other products are benefitting, as well. Sales of pet food, alfalfa hay, pecans, peanuts and prepared foods are expected to hit record or near-record levels.

Texas farmers and ranchers are ready to help produce the products to fulfill these increased market opportunities.

China was our second-largest market not long ago. Bringing China back as a sizable market for U.S. agriculture is critical to the economic sustainability of America’s farmers and ranchers.