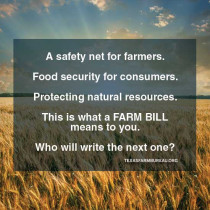 Who’s championing the next farm bill?

The key players of agricultural policy in Congress will have some new faces next year.

Gone from the U.S. Senate and U.S. House will be three of the four main negotiators of the most recent farm bill.

Texas Congressman Mike Conaway and Sen. Pat Roberts of Kansas are each retiring after years of service and committee leadership. Minnesota Congressman Colin Peterson, the current chair of the House Committee on Agriculture, was defeated in his re-election bid on Nov. 3 after 30 years of service.

Of the four farm bill negotiators, only Sen. Debbie Stabenow of Michigan returns to Capitol Hill.

Both the Senate and House will have new chairs of their respective agriculture committees.

Democratic Reps. David Scott of Georgia and Jim Costa of California are both seeking the committee chairmanship in the House. Scott has the most seniority on the committee. Costa is a third-generation family farmer and almond grower from California’s Central Valley.

The nation’s farm bill is typically renewed about every five or six years.

The new Congress that begins in January will begin laying the groundwork for the next farm bill and put its mark on agricultural policy. It will be interesting to see who steps up to champion the effort. Texas farmers and ranchers will be watching.