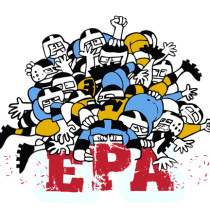 It’s a game I played as a kid. Someone would fall down and everyone would jump on top of him.

It was a lot of fun unless you were on the bottom.

There’s a different version of dog pile going on with the Environmental Protection Agency (EPA). Their efforts to extend the authority of the Clean Water Act to your backyard has met resistance from business groups, politicians, homeowners, farmers and ranchers and a multitude of others.

With challenges mounting to the proposal, EPA recently announced it will extend the comment period through Nov. 14. This is the second time the comments have been extended.

Is this just another sign of arrogance from EPA or a delay of the inevitable that their rule will be ditched?

Opposition here has been intense. Over 900 letters have been submitted to the EPA from Texas, far more any other state.