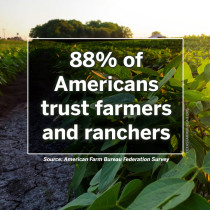 It’s good to be trusted.

It appears the public recognizes that food supply chain challenges created by COVID-19 were not within the control of farmers and ranchers.

A majority of U.S. adults also have a positive view of the sustainability practices of farmers. There is broad agreement from a majority of adults across demographic groups.

More than four in five adults also say feeding the world and farmers passing farms on to future generations are important.

Nealy half correctly ranked agriculture as the smallest contributor to greenhouse gas emissions by economic sector. That level of understanding can be improved. According to the latest Environmental Protection Agency data, agriculture accounts for 10 percent of total U.S. emissions, far less than the transportation, electricity production, commercial and residential, and industry sectors.

There is more work to be done, but the survey demonstrates that Americans are impressed by advancements in climate-smart farming. That should give Texas farmers and ranchers confidence going forward.