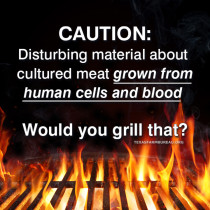 Recent articles about a new alternative protein are cringeworthy.

According to reports, a group of American scientists and designers have developed a concept for a grow-your-own steak kit using human cells and blood.

The steak could be grown by the diner at home using their own cells, which are harvested from the inside of their cheek and fed serum derived from expired, donated blood.

It’s shocking, to say the least. The cultured meat industry is finally turning to cannibalism. But, in this case, it’s not one company eating the competition. It’s much worse than that.

The lengths to which some in the anti-meat community will go has been revealed.

There is competition in the marketplace for alternative proteins. Consumers can decide for themselves what’s desirable. The key is transparency.

Only 100-percent live animal-produced protein should be labeled and marketed as a meat product. All packaged meat substitutes should feature their own label—not a meat product.

And in the case of this new concept of grow-your-own steak, the label is simply “gross.”