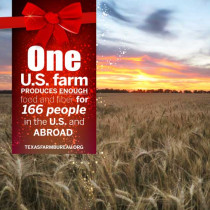 U.S. agriculture is a gift this season worth celebrating

The Christmas season is the season of giving, and someone who gives a lot every day is the American farmer and rancher.

One of my favorite farm facts is about the efficiency of modern agriculture. America’s farms and farmers are the world’s most productive.

Today, each farm produces food and fiber for 166 people annually in the United States and abroad.

Innovation, technology and hard work have made this achievement possible.

Since 1950, total U.S. corn yield, in tons per acre, has increased more than 360 percent. That’s just one example of how American agriculture continues to deliver.

What’s also amazing is that Americans spend the least for food.

U.S. consumers spend an average of just 10 percent of their disposable income on food each year. Citizens in other countries spend much more.

We are truly blessed with the world’s most affordable, abundant and safest food supply. That’s a gift this season worth celebrating.