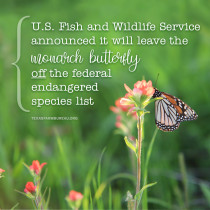 Monarch butterflies continue to migrate through Texas. They’ll land on habitat on many of our state’s farms and ranches during their trips north and south.

Lone Star State farmers and ranchers are thankful the monarch is not landing right now on the federal endangered species list.

The decision gives more opportunity for public-private partnerships to continue to support and enhance conservation efforts for the monarch.

More than half a million acres across the nation are currently set aside specifically to provide habitat for bees and butterflies. Many of those acres are in Texas.

An endangered listing of the butterfly would likely have significant impacts on agriculture.

If a listing were to occur, half of the state could be designated as critical habitat due to the expanse of the flyway.

The agency’s decision bodes well for farmers and ranchers working to conserve the pollinator.