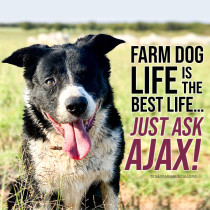 He’s a border collie. His name is Ajax.

He works hard every day to bring free-range sheep in from the pasture on the Ender farm in Texas. He also occasionally pens the sheep, brings them to water and helps load them on the truck. And Ajax does this with only one eye after an injury as a pup cost him his sight in the other eye.

Ajax enriches the life of his owner, Alexis, by teaching her how to listen not just to a dog, but to all animals, as well as other people.

Sound impressive? He is. So much so that Ajax is one of 10 finalists nationally for the Farm Bureau Farm Dog of the Year contest.

The contest celebrates farm dogs everywhere who work alongside their people to bring nutritious food to our table and our pet’s bowls.

The American Farm Bureau Federation teamed up with Nestle Purina for the third annual contest.  The award is always a crowd favorite.

A panel of judges select the winners. Judging of the contest is based on nomination materials submitted. Desired attributes in the Farm Dog of the Year are helpfulness to the farmer and his/her family, playfulness and obedience.

From all that I’ve read about Ajax, he just might be top dog. The winner will be announced in January. Good luck, Ajax!