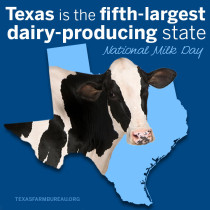 We raise our glass to Texas dairy farmers and dairy cows as part of National Milk Day.

The Jan. 11 event commemorates the day many think the first milk deliveries in glass bottles began in the United States. Alexander Campbell of the New York Dairy Company professed to the New York State Senate that his company was the first to make these deliveries in 1878.

The average American consumes 18 gallons of milk in a year. And milk is one of the few foods that one can potentially survive wholly on. Milk has all nine essential amino acids that humans require to build proteins.

I was accused of trying to live only on milk and cereal growing up. Maybe that claim wasn’t actually too far from the truth.

As a country, we consume about 21 billion gallons of milk a year.

Texas dairy farmers help fill many of those glasses and bowls. There are 351 dairies operating in our state. Texas is the fifth-largest dairy-producing state.

Nearly 2,900 gallons of milk are produced per year on average by a Texas dairy cow.

All of that helps give the Lone Star State legenDAIRY status.