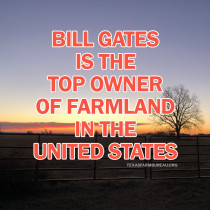 The topic of farmland is always of interest. Farmland is critical to our nation’s security. Any news about the resource is worth a look.

We know Texas has the most farmland of any state in the nation. Just over 29 million acres. That represents more than 17 percent of all state land.

The most valuable crops produced on Texas farmland are cotton, corn, hay and haylage, sorghum and wheat.

Thanks to recent headlines, we now know the name of the top private farmland owner in America. It’s Bill Gates of Microsoft fame. Surprised?

His farmland ownership is 242,000 acres in 18 states, according to The Land Report.

His largest holdings are in Louisiana, Arkansas and Nebraska. The report indicates Gates does not own any farmland in Texas.

Let’s hope the nearly quarter-million acres of land owned by Gates is being used productively. Farmland is a precious resource that we can never take for granted. It must be stewarded and used wisely. Once it’s converted and lost, it never returns.