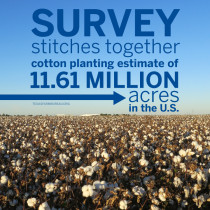 How much cotton will be planted? It’s an important question for farmers and others in the cotton industry. Several surveys and reports do their best to project planting intentions.

And the same is expected in Texas. The survey estimated 6.5 million acres of cotton will be planted in our state. That’s about a two-percent decrease from 2020’s final planting numbers.

Drought in areas of the state will be a big influence on planting decisions by farmers.

The survey pegged the national figure at 11.61 million acres of cotton planned for this year. That figure is 574,000 acres less than the U.S. Department of Agriculture’s (USDA) acreage report in June. And that report was already down 11 percent from 2019’s totals.

Cotton prices are a concern. The magazine pointed to decreased demand for cotton worldwide is partially due to the ongoing pandemic. Other factors impacting demand include reduced mill capacity, high carryover cotton stocks domestically and internationally and continued competition with India and Brazil.

Texas growers will have more planting estimates to look at in February when the National Cotton Council releases its acreage projections.