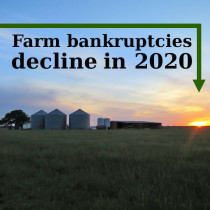 Farm bankruptcies down in 2020

Bankruptcy filings are a sobering economic indicator. They tell part of a larger financial story, most of the time.

Chapter 12 bankruptcy is often the last option for farmers and ranchers.

Chapter 12 farm bankruptcies in 2020 in both the U.S. and in Texas were down compared to the previous year.

There were 16 Chapter 12 farm bankruptcies in Texas last year. That’s six fewer than 2019.

Nationally, there were 552 Chapter 12 family farm and family fishery bankruptcies in 2020. The number is down 43 filings, or 7 percent, from 2019. Farm bankruptcies were highest in Wisconsin with 39 filings, followed by Kansas with 35 and Nebraska at 32.

The overall decrease may not be a concrete sign of economic improvement.

While bankruptcies were down from 2019, the 552 filings nationally last year are still the third-highest number in the last decade.

Several years of low commodity prices, along with natural disasters and flooding and an ongoing global pandemic, all contributed to the financial stress.

The overall outlook for Texas agriculture this year is bright. Higher prices in the market are expected, thanks to very strong exports. That’s encouraging. Officials say it’s important that those exports continue and recover in top markets such as Mexico, Canada, Japan and South Korea.