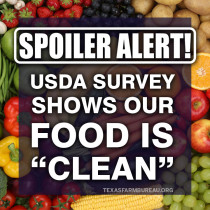 The U.S. Department of Agriculture (USDA) conducts tests of common commodities to determine to what extent that food may expose a consumer to pesticides. It’s called the Pesticide Data Program.

There’s some really good news from the program’s most recent findings.

For calendar year 2019, nearly 99% of the commodities tested in the survey had residues below the allowable U.S. Environmental Protection Agency (EPA) tolerances for those substances. That means that nearly 99% of the food examined by USDA has either no pesticide residue or had minimal levels of residue that fell well within or below the government’s tolerance levels for any given pesticide product. About 45.2% of the samples had no detectable residue at all.

USDA partners with 10 states on the survey, including Texas. The states represent about 50% of the U.S. population and are major producers of fresh fruits and vegetables.

The produce is rinsed under cold water before testing. Nothing else is done to clean or alter the product.

The commodities selected are based on what data EPA needs at the time, as well as which commodities are most likely to be consumed by infants and children.

Consumers deserve to know that their food is wholesome and safe. Thanks to the Pesticide Data Program, we can say with confidence that the answer is “yes” to both.