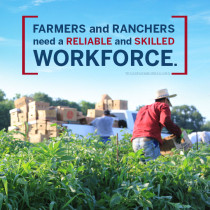 The issue of agricultural labor is making headlines again.

The U.S. House recently passed the Farm Workforce Modernization Act. It’s only the second time since 1986 that the House has approved an agriculture immigration reform bill.

The bill’s prospects in the U.S. Senate remain unclear.

Reliable, skilled labor continues to be a critical issue for America’s farmers and ranchers.

The current farm workforce is aging. Farmers and ranchers struggle to fill positions.

Farm and ranch work is challenging, often seasonal and transitory. With fewer and fewer Americans growing up on the farm or ranch, it’s increasingly difficult to find American workers interested in these kinds of jobs. Where American workers are unwilling or unavailable, workers from other countries have provided crucial support to American agriculture.

The issue is complex and politically charged.

But the fact remains that instability in the agricultural workforce puts domestic food production at risk.

Let’s hope a solution can be found that provides farmers and ranchers and their employees the stability they need to keep American agriculture growing.