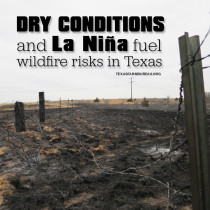 Texas is experiencing a La Niña weather pattern. And drought is intensifying. That combination leads to increased wildfire potential.

Mid-February through mid-April is the peak of the Texas winter/spring fire season.

This time of year is particularly vulnerable to wildfire activity because vegetation is dead or dormant, and winter winds dry them out even more, creating the perfect fodder for wildfires to begin. Once a wildfire is burning, those same winds can whip a small blaze into a frenzy and spread it.

Officials say fires are worse in years when Texas has experienced a La Niña weather pattern.

Since 2005, more than 5.7 million acres have burned during winter and spring season in La Niña years. That compares to just over 280,000 acres in non-La Niña years.

In 2017, Texas suffered extreme losses. Wildfires that year blazed across the Texas Panhandle, scorching nearly half a million acres and causing over $21 million in agricultural losses.

Let’s hope this year is much better.